Ovation Brands’ portfolio of restaurants is Old Country Buffet, Ryan’s, Hometown Buffet, Country Buffet, and Furr’s Fresh Buffet this time for Family Night the promotion featuring the popular game and TV series, Yu-Gi-Oh! Yu-Gi-Oh! is a Japanese manga series about gaming, written and illustrated by Kazuki Takahashi. The plot follows the story of a boy named Yugi Mutou, who solves the ancient Millennium Puzzle. Yugi awakens a gambling alter-ego within his body that solves his conflicts using various games. The manga series has spawned a franchise that includes multiple spin-off manga and anime series, a trading card game along with numerous video games. 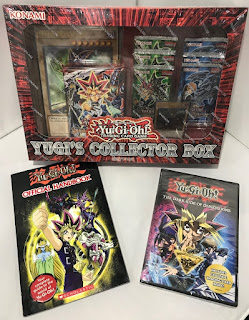 Most of the incarnations of the franchise involve the fictional trading card game known as Duel Monsters, where each player uses cards to "duel" each other in a mock battle of fantasy "monsters". This forms the basis for the real-life Yu-Gi-Oh! Trading Card Game.

Each Thursday, from July 5th through August 9th between 5 p.m. and 8 p.m., kids may participate in different interactive and educational activities in Ovation Brands’ restaurants and Furr’s Fresh Buffet locations. PLUS kids eat for $1.99 from 4 p.m. to close with the purchase of a regular-priced adult or senior meal. 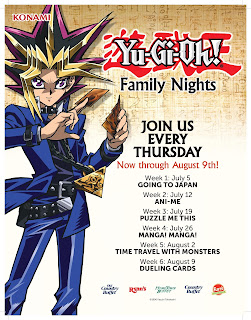