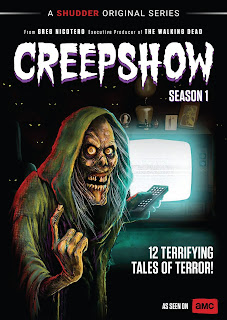 The new anthology series based on George A. Romero’s 1982 horror-comedy classic, is still the most fun you’ll ever have being scared! A comic book comes to life in a series of twelve vignettes over six episodes, exploring terrors from murder to the supernatural and unexplainable. Haunted dollhouses, werewolves, murderous goblins, villainous trick-or-treaters, the dead, and medical marvels are just a few of the things to watch out for in this new series. You never know what will be on the next page...
Special features on the DVD and Blu-ray include:
·      Cast and Crew Interviews
·      Behind the Scenes Footage
·      Creepshow Season 1 Easter Eggs Featurette
·      Audio Commentaries with Cast and Crew
·      Episode and Comic Art Photo Galleries
·      Comic Art Booklet and more!
See more at https://us.rljentertainment.com/franchise/creepshow-season-1
Facebook
Instagram
Disclaimer: I received one or more of the products or services mentioned above for free in the hope that I would mention it on my blog. Regardless, I only recommend products or services I use personally and believe will be good for my readers. I am disclosing this in accordance with the Federal Trade Commission's 16 CFR, Part 255: "Guides Concerning the Use of Endorsements and Testimonials in Advertising.