Mandisa Out of The Dark CD Review & Giveaway

10. Good News
11. Prove Me Wrong
12. Mothsida Interlude
13. The one He Speaks Through
14. Shine
15. My First Love
Bonus Content
16. Shame Off
17. Keep Getting Up
18. Back To Life
My Opinion: I really enjoyed this CD and find some very meaningful lyrics that I can relate to and I couldn’t help but smile and sing along.
To see more visit and purchase your own copy http://smarturl.it/OutOfTheDark.all?IQid=flyby 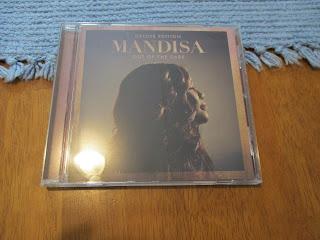 Mandisa wrote her song “Overcomer” in 2013 to encourage her close friend Kisha, who was battling breast cancer. Mandisa really believed and prayed that God was going to heal her, but when Kisha went to be with Jesus in 2014, Mandisa’s foundation was shaken in a way she never expected. She fell into a deep pit of depression for close to 3 years, shutting out her friends, family and the rest of the world. Mandisa believes if she had kept going down that road she was on, she would not be here today… but God stepped in and lifted her out of that pit by using her close friends to communicate their love for her and God’s love for her. This album is Mandisa’s way of letting her fans into her story – it’s called 'Out Of The Dark' because that is exactly where God lifted her out of!
Visit her website at http://mandisaofficial.com/home
Facebook: https://www.facebook.com/mandisaofficial
Instagram: https://www.instagram.com/mandisaofficial
Twitter: https://twitter.com/mandisaofficial

“Disclosure (in accordance with the FTC’s 16 CFR, Part 255:  “Guides Concerning the Use of Endorsements and Testimonials in Advertising”):  Many thanks to Propeller Consulting, LLC for providing this prize for the giveaway.  Choice of winners and opinions are 100% my own and NOT influenced by monetary compensation.  I did receive a sample of the product in exchange for this review and post.

Email ThisBlogThis!Share to TwitterShare to FacebookShare to Pinterest
Labels: Mandisa Out of The Dark CD Review & Giveaway

Ogden’s Own , the largest independent distillery in the state of Utah, has officially doubled the size of its recently released canned coc...