Out now from Mill Creek Entertainment is War Favorites 5 Movie Collection with an MSRP of $9.98 from the 1940-1950s. This is the Army starring Ronald Reagan, George Murphy, and Joan Leslie came out in 1943 and runs 115 minutes. This is an Oscar-winning film, a musical is put on the servicemen fighting in World War I and a soldier who performed in the shelf heads off to war, where he is wounded and is forced to give up his career as a performer and become a producer. When World War II breaks out, a cast of the original musical decides to stage a new version for the servicemen heading off to fight. The producer’s son, soon to be heading off to battle, is torn by his love for his fiancée and his call of duty so he refuses to marry her until after the war.
Go For Broke! Starring Van Johnson, George Miki, and Lane Nakano came out in 1951 and runs 97 minutes. In this Oscar-nominated film, a group of Japanese-American volunteers is organized into the 42nd Regimental Combat Team for deployment into the European theater of operations. 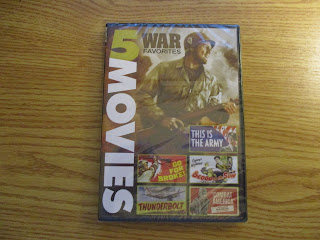 Led by Lieut. Michael Grayson, a bigoted Texan with no faith in the skills or conviction of the men under his command, the recruits train hard to prove himself to their commander, the Army and themselves.
Blood on the Sun starring James Cagney, Sylvia Sidney, Porter Hall came out in 1945 and runs 97 minutes. This Oscar-winning film begins prior to the outbreak of World War II. Nick Condon, the American editor of a Tokyo newspaper, suspects the Japanese military is responsible for the deaths of his two friends. Discovering information about the “Tanaka Plan”, a Japanese military out wine for world conquest, Condon vows to secure the document and get into the hands of the American military at any cost. Teaming up with a half-Chinese woman, Condon sets out to secure the plans in spite of the problems brought upon him by the Tokyo police, the Japanese high command, in the traitorous action of fellow journalists.
Thunderbolt starring James Stewart, Lloyd Bridges, Robert Lowery came out in 1947 and runs 45 minutes. This document chronicles the exploits of the P -47 thunderbolt pilots of the “Fighting Gamecocks” of the 65th fighter squadron, 57th fighter group. Based on the island of Corsica off the northwest coast of the Italian boot, they flew from behind the enemy’s flank. As part of “Operation Strangle”, they continuously attacked highways, bridges, ammo dumps, railroads and just about anything that moved to choke off the flow of supplies to the axis front line.
Combat America which stars Clark Gable, Bob Hope, Francis Langford came out in 1943 and runs 62 minutes. This documentary was produced in 1943 under the guidance of then Army Air Force Lieut. Clark Gable. This film features a single eighth Air Force B-17 crew from the 351st bombardment group based in England. The documentary falls the ground and air crew from their training through a series of bombing missions over Europe.
Now, these films aren’t what I really enjoy but my dad does he can watch these over and over again I think it’s because it reminds him of his childhood and back then the movies were better quality.
To see more visit http://www.millcreekent.com/war-favorites-5-movie-collection.html
Facebook: http://www.facebook.com/MillCreekEnt
Twitter: https://twitter.com/millcreekent 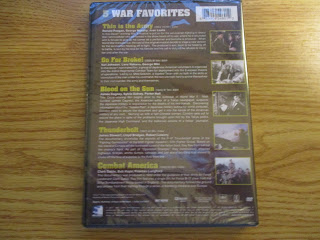 Disclaimer: I received one or more of the products or services mentioned above for free in the hope that I would mention it on my blog. Regardless, I only recommend products or services I use personally and believe will be good for my readers. I am disclosing this in accordance with the Federal Trade Commission's 16 CFR, Part 255: "Guides Concerning the Use of Endorsements and Testimonials in Advertising.
at May 22, 2017