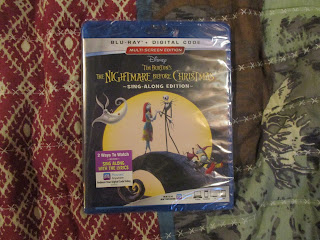 The new edition audiences to experience “The Nightmare Before Christmas” two different ways: the original, full-length film, in which the holidays collide with chaotic and comical consequences, and all-new sing-along mode, which includes pop-up lyrics to 11 unforgettable songs like“What’s This”and “This Is Halloween.” The Multi-Screen Edition of “The Nightmare Before Christmas” includes a Blu-ray and Digital Code giving viewers the flexibility to watch the film on different devices. Jack Skellington Halloweentown’s beloved Pumpkin King, is bored with the same old annual scare-and-scream routine and longs to spread the joy of Christmas. But his newfound obsession puts Santa in jeopardy and creates a nightmare for good little boys and girls everywhere. Jack is surrounded by a creepy and captivating cast of characters, including Sally a resourceful rag doll that has trouble fitting in, like her good friend Jack; mad scientist Dr. Finklestein; the two-faced Mayor of Halloweentown Oogie Boogie a rambling, gambling bag of bugs; and Lock one in a trio of trick-or-treating troublemakers.
Bonus Features:
Shriek along with these ghoulish tunes from the movie, or just lend an ear if you find singing to be particularly ghastly.
“This Is Halloween”
“Jack’s Lament”
“What’s This?”
“Town Meeting Song”
“Jack’s Obsession”
“Kidnap the Sandy Claws”
“Making Christmas”
“Oogie Boogie’s Song”
“Sally’s Song:
“Poor Jack”
“Finale/Reprise”
CLASSIC BONUS FEATURES
The Making of
The Beginning - Tim Burton and the filmmakers detail the early stages of the beloved film.
Music - Discover how composer and lyricist Danny Elfman expressed Tim Burton's unique vision through the timeless songs heard in the film.
Storyboards - In the storyboard phase, visual representations are first drawn for each scene and then put together in sequential order.
Art Direction - From camera angles to miniature sets, just about every detail of the film was meticulously plotted by the filmmakers.
Puppets - All of the characters' puppet models are constructed in a process that takes them from their metal base to the final painted mold.
Animation - An incredible mix of artistry and patience is required to produce the stop-motion magic of “The Nightmare Before Christmas.”
Deleted Storyboards
Behomoth Singing - In this unused storyboard sequence, we learn there may have been more to Behemoth than the overalls let on.
Oogie Boogie with Dancing Bugs - Unused because of its difficulty to animate—take a look at this storyboard sequence where Oogie Boogie cuts a rug with some bugs.
Alternate Identity of Oogie Boogie - Although never used in the final film, Oogie Boogie was almost a mere alter ego for someone very close to Jack and Sally.
Deleted Animated Sequences
Vampire Hockey Players - Tim Burton almost had quite the grotesque cameo, but he was replaced by a pumpkin in the final film.
Lock, Shock and Barrel - Lock, Shock and Barrel settle in for a front-row seat while Oogie Boogie terrorizes Santa and Sally.
Oogie Boogie Shadow Dance - The Boogie Man was never one to shy away from the spotlight, as is evident in this deleted dance sequence.
Tim Burton’s Early Film: “Frankenweenie” (Uncut Version) - Before Tim Burton gave us all nightmares, he created this electrifying short film that replaces Frankenstein's monster with a dog.
“What’s This?” Jack’s Haunted Mansion Tour - Take a ride through Jack's Haunted Mansion Holiday and see how Disney Imagineers transformed an iconic Disneyland attraction.
Tim Burton’s Original Poem Narrated by Christopher Lee - Hear Hollywood legend Christopher Lee narrate the poem that inspired the movie. Set over illustrations based on Tim Burton's art.
Storyboard-to-Film Comparison - See the final version of Jack's Christmas pitch to the people of Halloween Town next to the original storyboards.
Theatrical Trailer - In this theatrical trailer, enter a place where every day is Halloween—till Jack Skellington shares his unique view of Christmas!
Teaser Trailer - This trailer highlights Disney's long history with technology in filmmaking and heralds a new collaboration with Tim Burton.

BLU-RAY EXCLUSIVES:
Tim Burton’s Early Film: “Vincent” - Vincent Price himself narrates this stop-motion tale of little Vincent Malloy and his fascination with the macabre.
Posters - Take a look at some promotional posters from the movie's release.

My Opinion: This is a classic movie to see at Halloween and I remember when it came out. I love the romance between Jack & Sally the love they find in one another, the musical is just magical.
To see more visit https://movies.disney.com/The-Nightmare-Before-Christmas
Facebook: https://www.facebook.com/TheNightmareBeforeChristmas 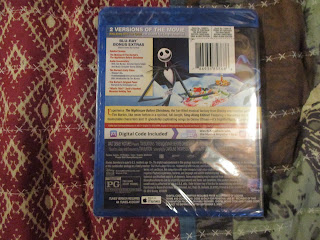 Just in time for Christmas is Axol and Friends Weighted Axol the Axolotl Plush. Axol The Axolotl is a plush designed in the image of the en... 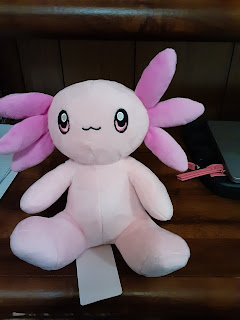